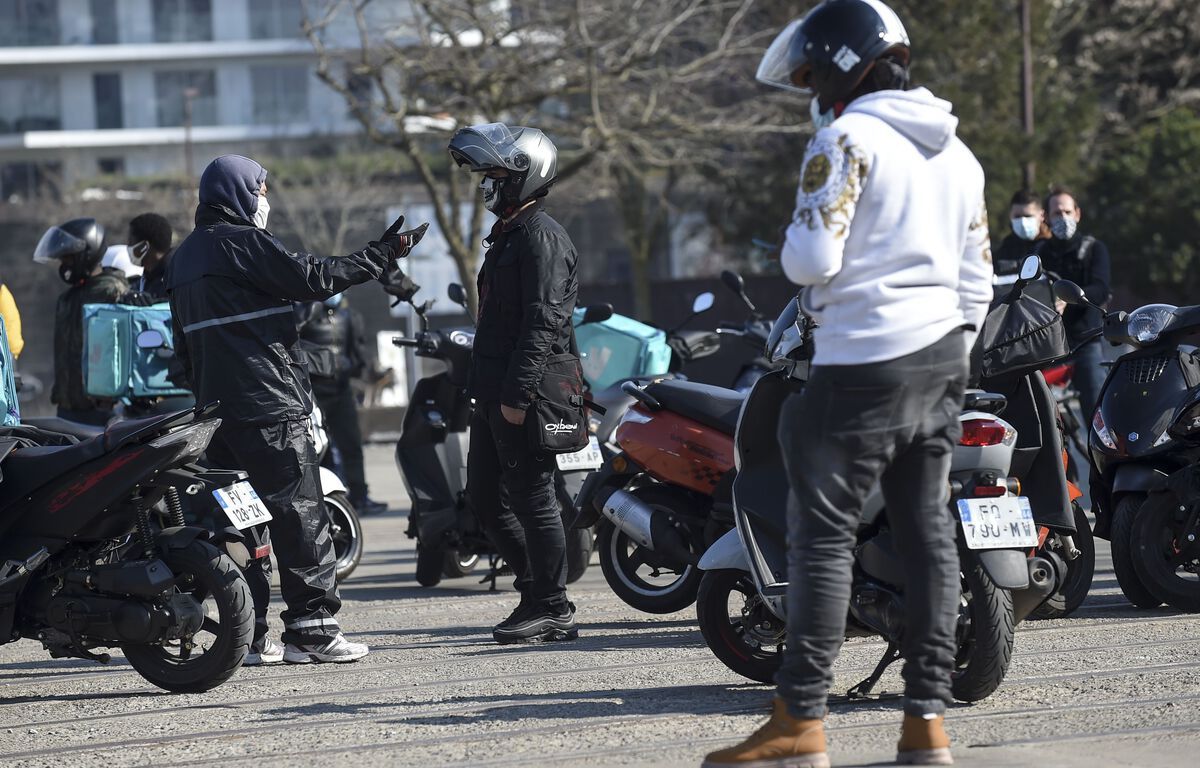 This is the flip side. Helped by the containment measures, the catering delivered has experienced a boom in recent years* with the logical corollary of the increase in nuisance related to deliveries. A phenomenon accentuated by the appearance of dark kitchens, restaurants that only deliver, and even dark stores, supermarkets without shelves, except in the wheels of delivery people. In short, more and more couriers, sometimes on bicycles, but often on scooters, so much so that in March 2021, the Nantes town hall decided to ban thermal scooters from the pedestrian center. The city of Montpellier had taken a similar measure some time before.

And in mid-March 2022, it was the turn of the mayor of the 17th arrondissement to tackle “the nuisance generated by the proliferation of delivery people in Paris”, according to his press release. Geoffroy Boulard therefore decided to create “a parking area at the corner of avenue de Villiers and boulevard Berthier”. It is a place where delivery people can “gather together, and thus limit the impact of their activity on local residents”. We therefore asked our readers if they were bothered by these dark kitchens and dark stores. And reading the testimonials, some of you are living a nightmare.

This is also the term used by Angélique de Courbevoie (Hauts-de-Seine) who describes “urban rodeos in the street, car park descents taken for a urinal, sidewalks squatted by delivery men who park and drive on them “. Nikita says she lives above a dark kitchen and witnesses an incessant and noisy ballet. “From 7 p.m., the motors of the scooters are heard to position themselves near the restaurant and thus be ready to deliver the first orders, she explains. Throughout the evening, the comings and goings of scooters are heard and the engines roar until the restaurant closes around midnight. Even when the engines are off, the delivery people are the cause of nuisance: loud conversations, music, films on smartphones and sometimes altercations between them. »

Same story for Gautier, who lives opposite a restaurant of a fast food chain in Montparnasse. “The nights have become very complicated because if the restaurant closes around midnight, the delivery continues until around 5-6 am, he says. Throughout the night, you can have up to 1 or 2 scooter starts every 2-3 minutes. “A situation so unbearable that he decided to move to” a very quiet place in the suburbs “. “The scooter assembly point was right under our windows,” says Charlotte, who also moved because of the nuisance. The same goes for Léo, who “definitely left Paris (and the Paris region) largely following the installation of a dark kitchen downstairs from my house”. He specifies: “My life had become hell and I could no longer bear to see how Paris is turning into a large lifeless delivery logistics area. »

This is also one of the concerns of David Belliard, Deputy Mayor of Paris in charge of mobility, who “does not want Paris to become a dark city “. For the local elected official, there is the issue of nuisances – pollution, noise, endangerment – ​​and the issue of commercial diversity. “In the 11th arrondissement where I am elected, more and more dark kitchens or dark stores are settling in place of shops, but life is no longer the same,” he laments. To deal with these problems, “we are looking for all the solutions and tools”, promises David Belliard who concedes that it is a “complicated” subject. On the commercial aspect, the town hall of Paris is mobilizing the local urban plan which makes it possible to protect the commercial districts because the dark stores must register as warehouses and not stores.

Regarding nuisances, the elected EELV indicates “supporting the experimentation of the 17th arrondissement” but he says he fears “a report of nuisances”. The reserved area is a track but is not the miracle solution. Charlotte indicates that a place had been chosen by the public authorities “a little away from homes, but the delivery men found it too far from the shopping street and indicated that they were not receiving orders. So they never stuck to it.” The idea of ​​a reserved place also leaves Jean Terlon skeptical. The vice-president of Umih restoration recalls that the quality of the delivery is judged on the speed and that with these reserved areas, it is lengthened. “Similarly, on receipt, will the consumer go out to the point of delivery? The principle of delivery is still to have it delivered to your home, ”he wonders.

Our readers also put forward their ideas for reducing nuisance. “The only solution that would protect all residents is to prohibit deliveries by motorized vehicle from 10 p.m.,” said Aude. Sophie, who lives in Nanterre, is on the same line and testifies: “A pizzeria next to my house is equipped with electric scooters. Zero nuisance from this restaurant. In this, Sophie and Aude join David Belliard who wants to “work with delivery platforms so that delivery people use electrically assisted bicycles”. But it’s not that simple since the delivery people being self-employed, it’s up to them to buy their means of transport and a thermal scooter is much cheaper than an electric one…

Martin, from Nantes, works in a delivery company himself and has seen a dark store set up near his job. Witness “really exhausting incessant noise”, he recalls that “delivering with a motorized vehicle without having a license from the Ministry of Transport is quite simply illegal. But there is never any control, which is just amazing. He also proposes that “set up a technical control for two-wheelers, and include verification of compliance with a strict hearing standard”. Unfortunately for Martin, this control was suspended by Macron last summer.

Finally, our readers do not forget the delivery people themselves. “The poor eat on the floor in the street because they can’t sit anywhere. In winter, they wait hours outside without being able to warm up. It is shameful ! Amandine says indignantly. For Charlotte, “the platforms should themselves take their part in solving this problem by offering a meeting place, with toilets, break room, coffee machine, water point, etc. Leo agrees and recommends “forcing the platforms to pay their delivery people, give them decent working conditions”. David Belliard joins them in demanding to “review the conditions of organization of this sector based on precariousness”. A subject that has not yet been invited into the presidential campaign.